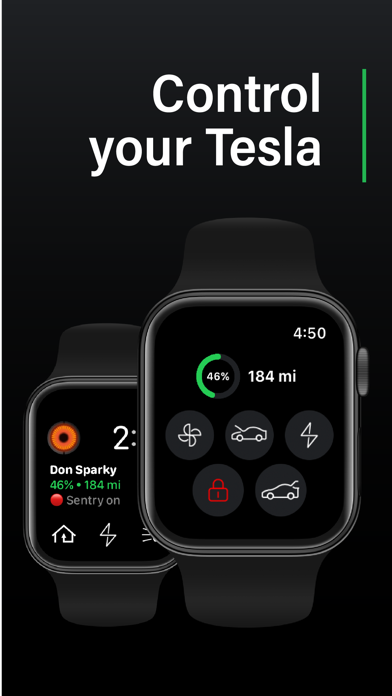 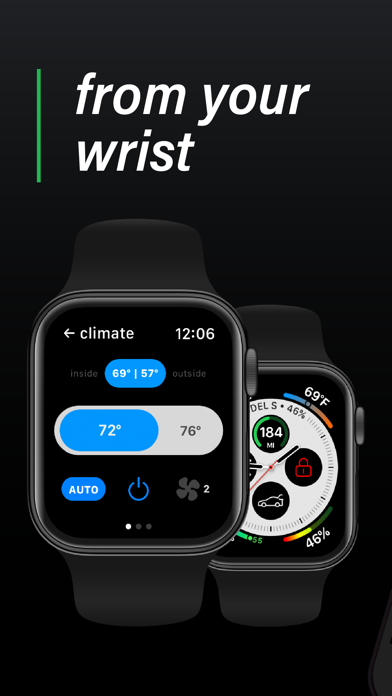 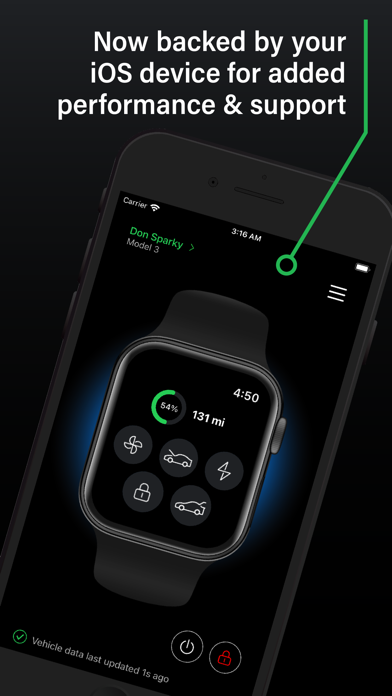 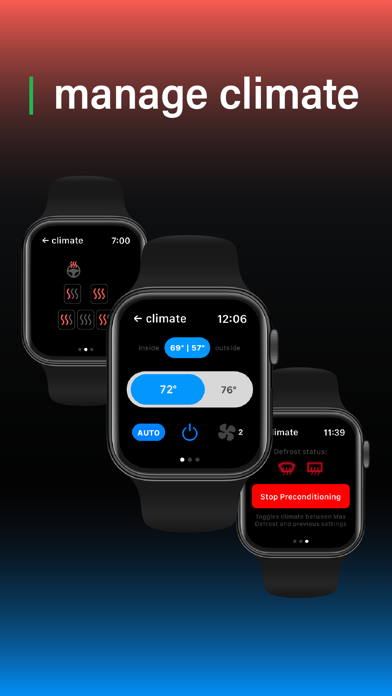 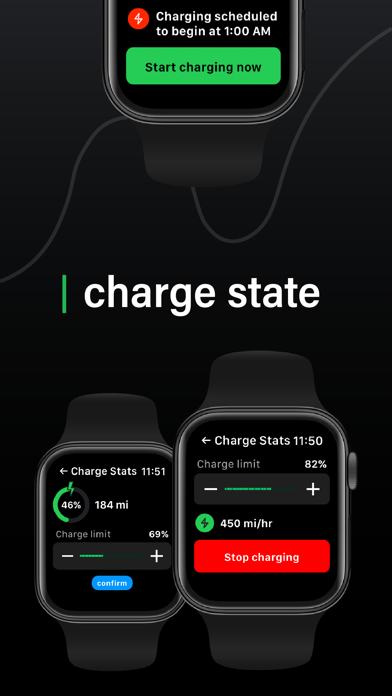 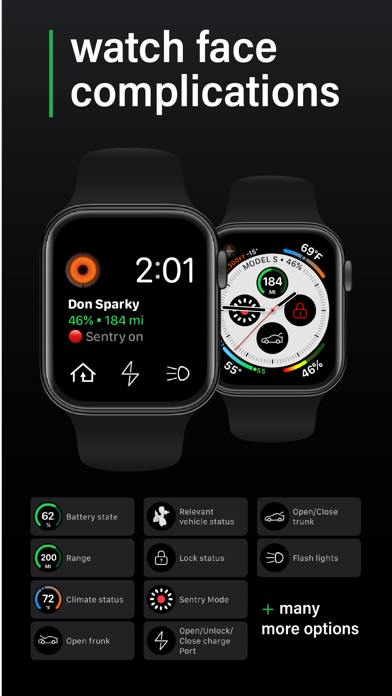 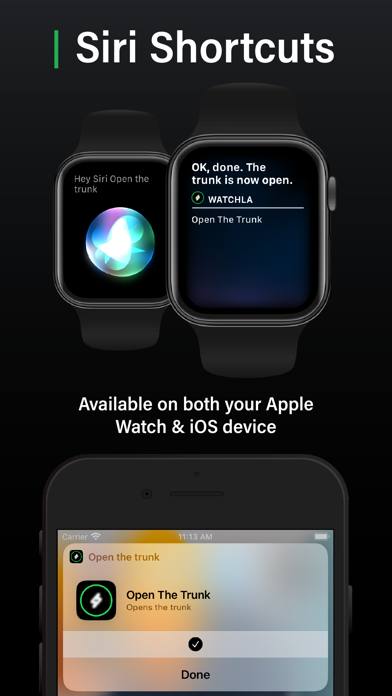 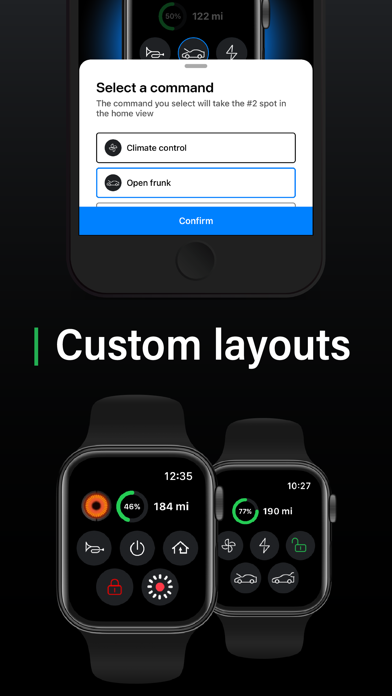 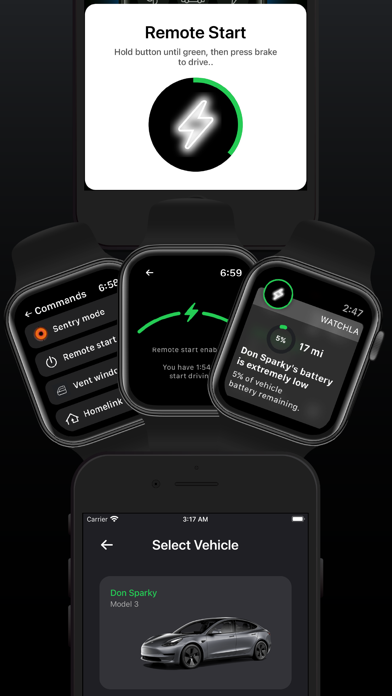 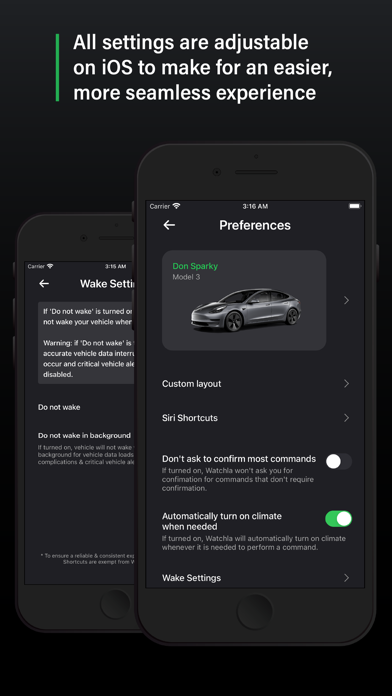 Watchla delivers full control of your Tesla to the convenience of your wrist.

With a beautiful, clean & effective UI, Watchla is a watch app for Tesla that aims to replace your phone for most of your remote access needs with your Tesla.

No more pulling your phone out of your pocket every time you want to check on your Tesla or tell it to do something. With Watchla all you have to do is raise your wrist to start interacting with your Tesla.

Watchla, being a fully capable app made for the everyday Tesla owner, can:

– Check various vehicle statuses (charge, climate, etc)
– Perform vehicle commands
– Offers an array of complications to keep you up to date with your Tesla right from your watch face
– Notify you of critical vehicle alerts

Watchla is also supported by a robust iOS companion app that you can use to enrich Watchla’s experience.

Use Watchla’s iOS companion app to:

Watchla holds your privacy and its transparency to the highest level and therefore Watchla has decided not to accept your account credentials as a form of sign in. Watchla will never see, process or store your email or password.

As an alternative to credential sign in, Watchla offers the ability to Sign in with Tesla right from Watchla’s iOS companion app. Sign in with Tesla is a secure method of signing in that allows you to authenticate your Tesla account directly on Tesla’s website. No more inputting your email & password on 3rd party app text fields. Once authenticated, you will be automatically signed into Watchla with your Tesla account both on the iOS and watch app.

Your account credentials are never processed or saved by Watchla.

As an alternative, you can also sign in to Watchla using your Tesla API access token. Just paste it in and you’re good to go! We recommend using our Tesla token management app, Authla!

Looking into the future:

Watchla is always evolving in an effort to deliver a top-quality Tesla watch app experience. In the future, Watchla will be seeing many upgrades like:

– Smart Summon
– Watch gesture initiated commands
– Even more watch face complications
– A wider array of critical vehicle alert types that are customizable so you can be informed on the specific issues about your Tesla that matter most to you.
– And a ton of more watch focused features that will elevate your Tesla experience on your wrist.

In addition, Watchla is always listening to users and any user can request a feature they think will fit nicely into the Watchla experience. Many user-submitted features have already made it to Watchla and it is likely that there are many more to come. If you would like to request a feature for Watchla, you can do so here: https://watchla.app/feedback/#req-new-feature

Download Watchla, the ultimate watch app for Tesla and experience total control over your Tesla, from the convenience of your wrist.

Disclaimer: Watchla is an independent Tesla watch app and it is not owned or endorsed by Tesla Inc. Watchla utilizes Tesla’s open API to safely & securely provide you with remote access to your Tesla vehicle from your watch. Watchla is an independent watch app and (aside from signing in) doesn’t need its iOS companion app to perform normally, only a stable internet connection to the watch app is needed to function properly.

Follow up update to the release of Lock Screen Widgets: