MusicBox: Save Music for Later 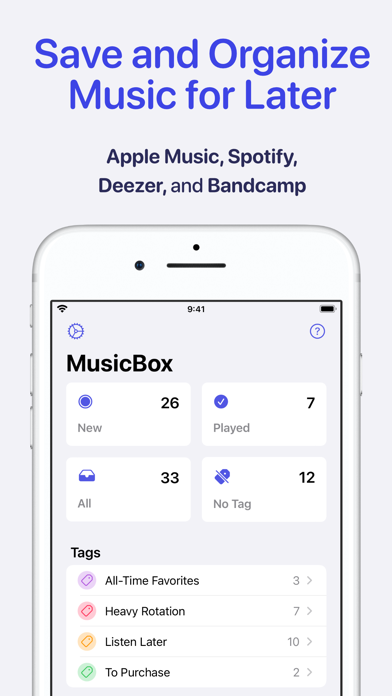 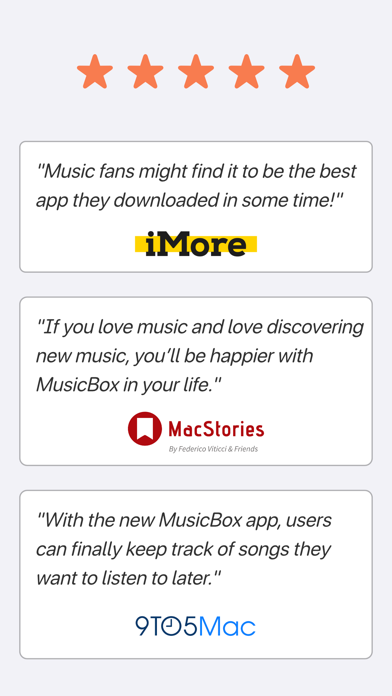 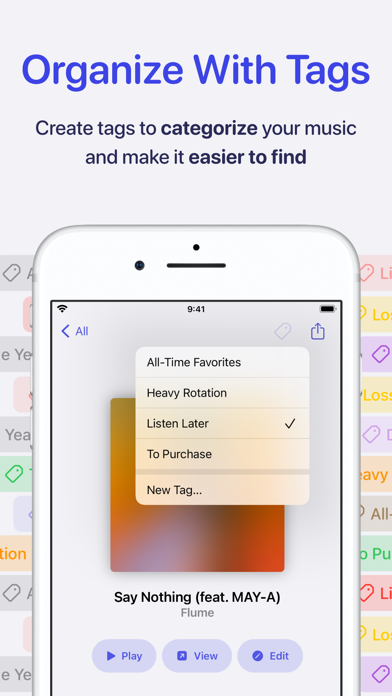 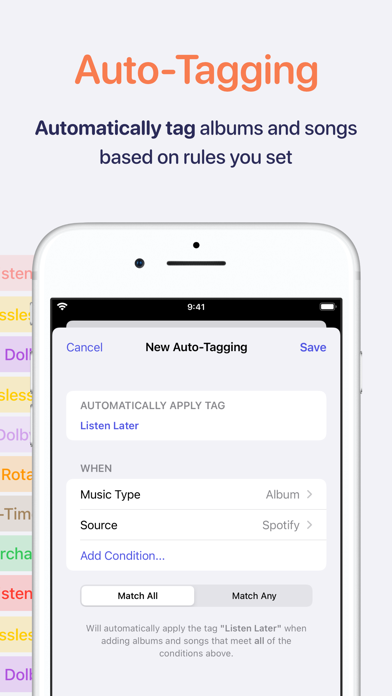 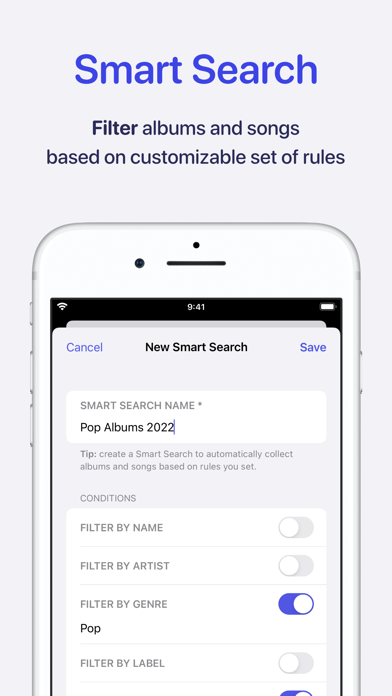 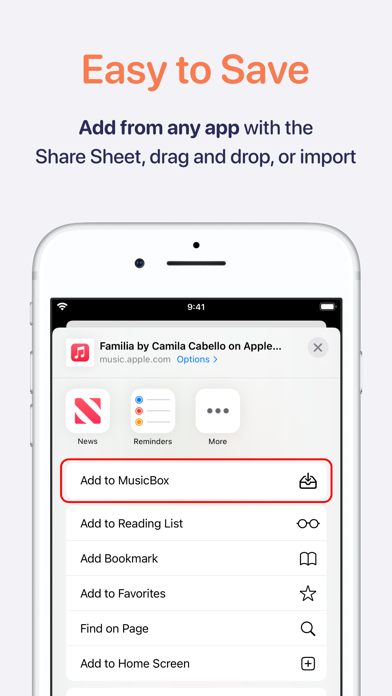 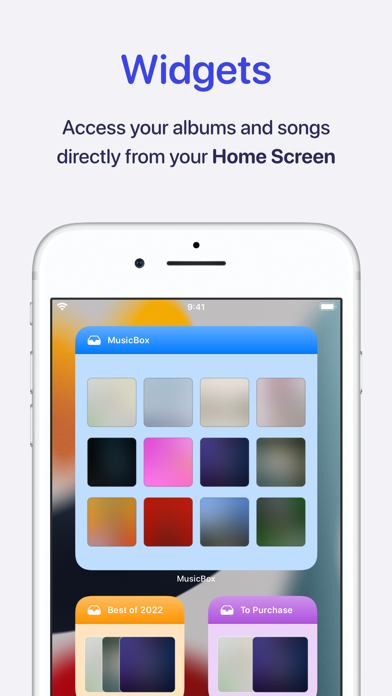 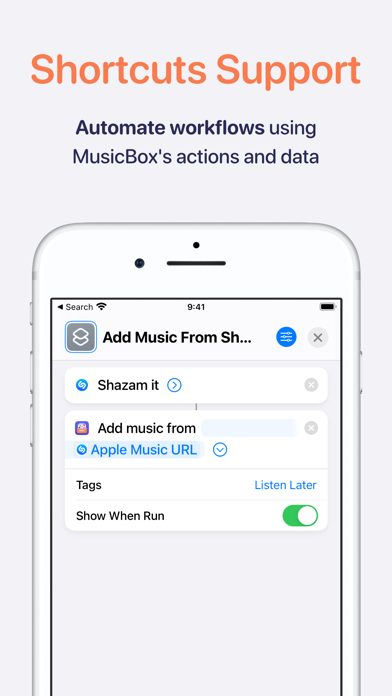 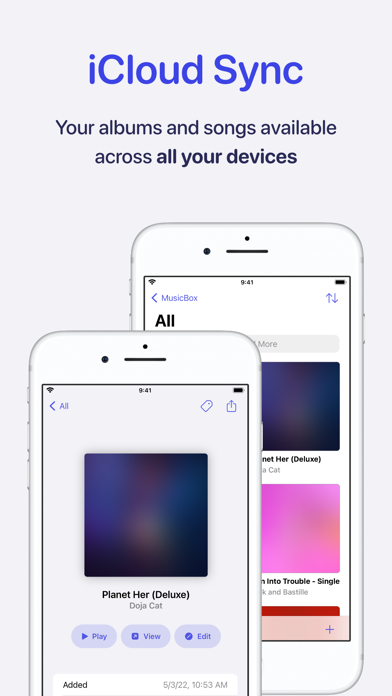 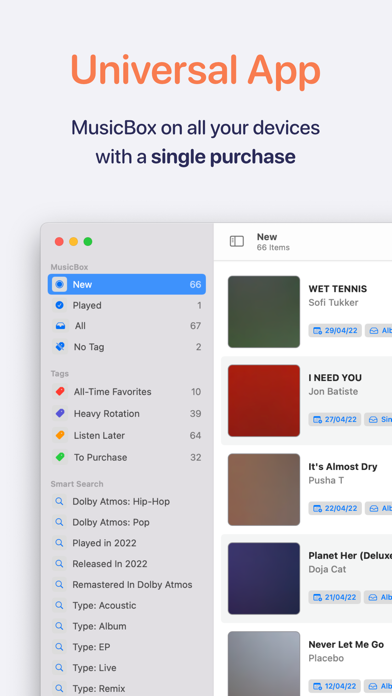 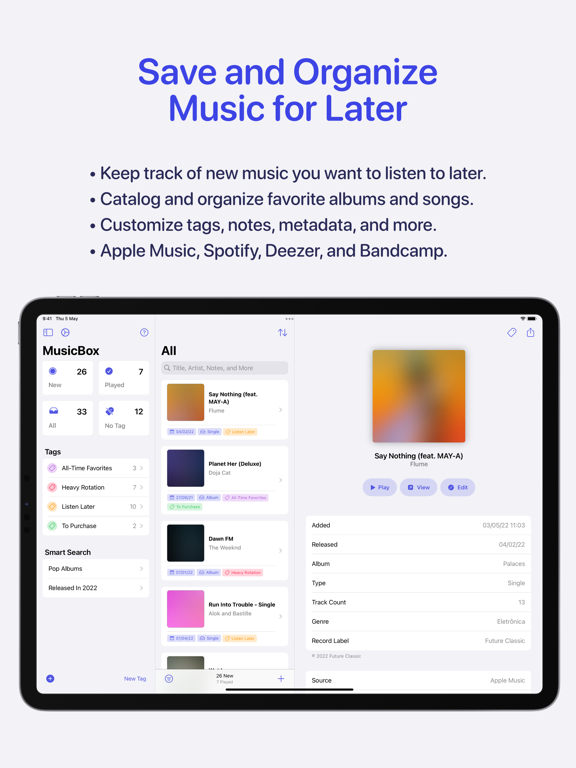 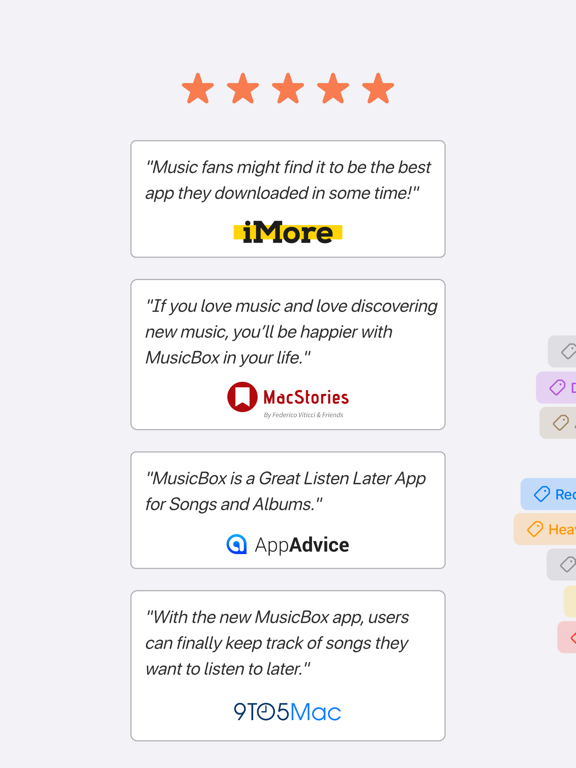 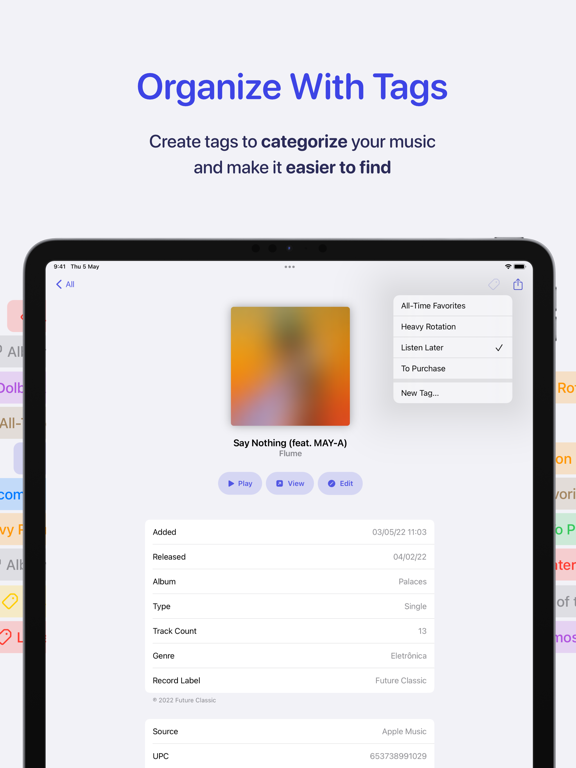 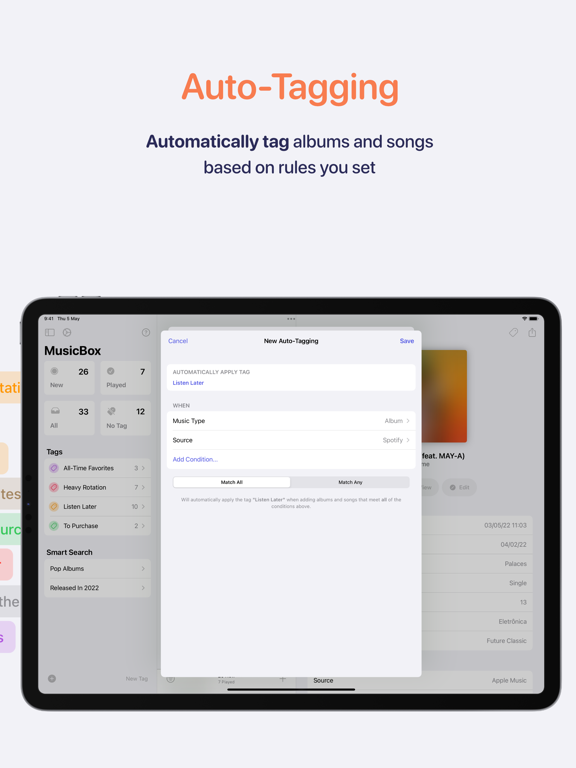 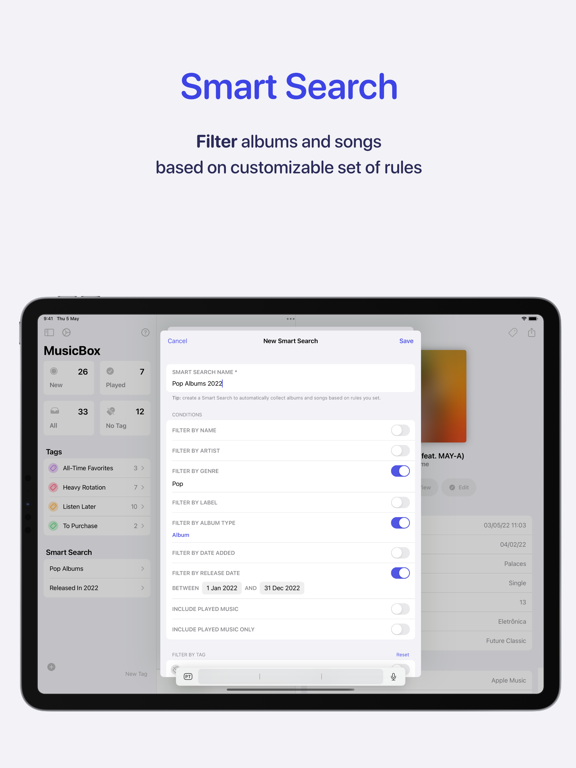 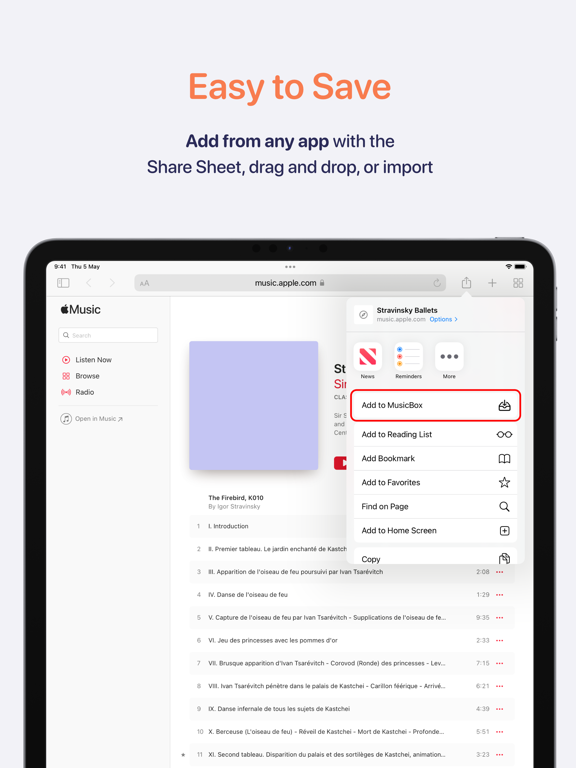 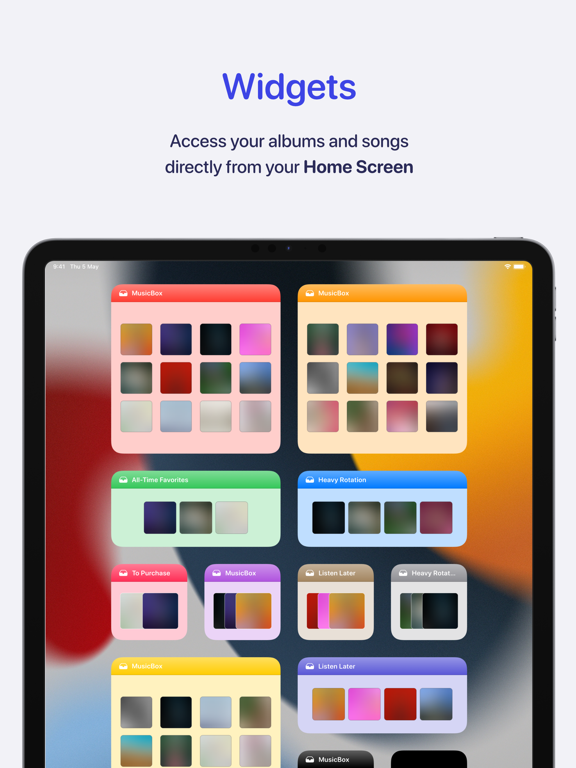 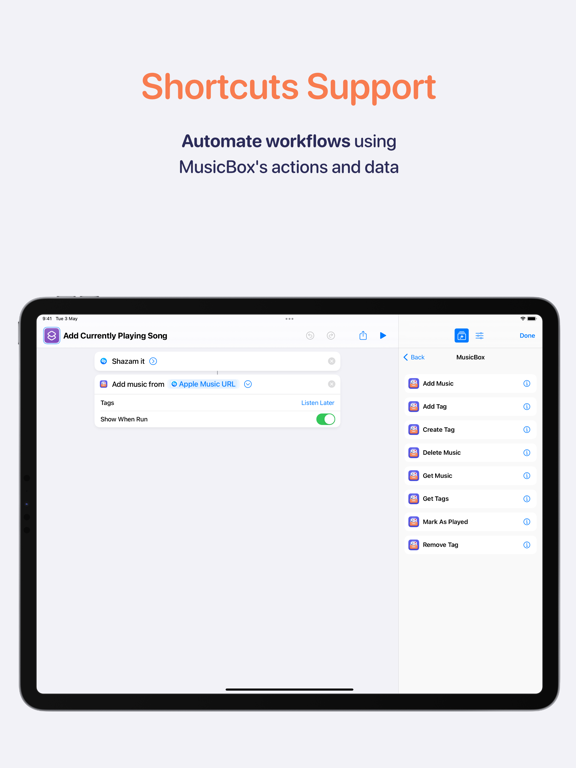 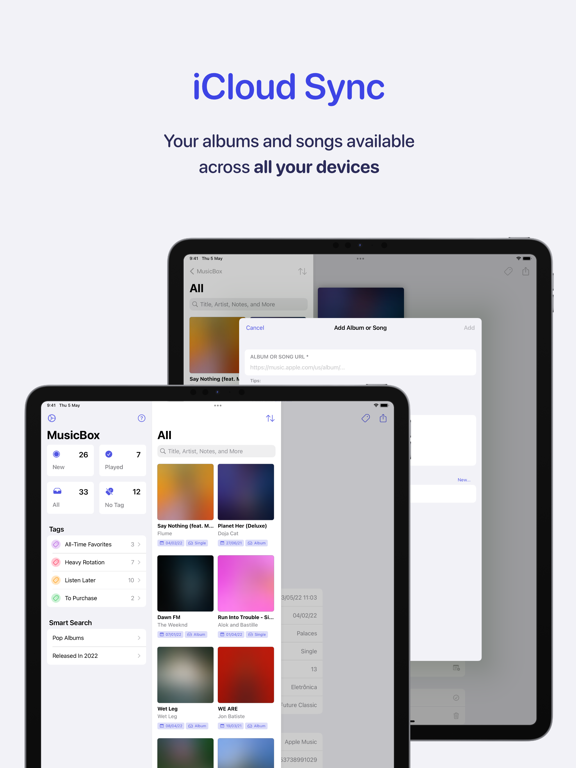 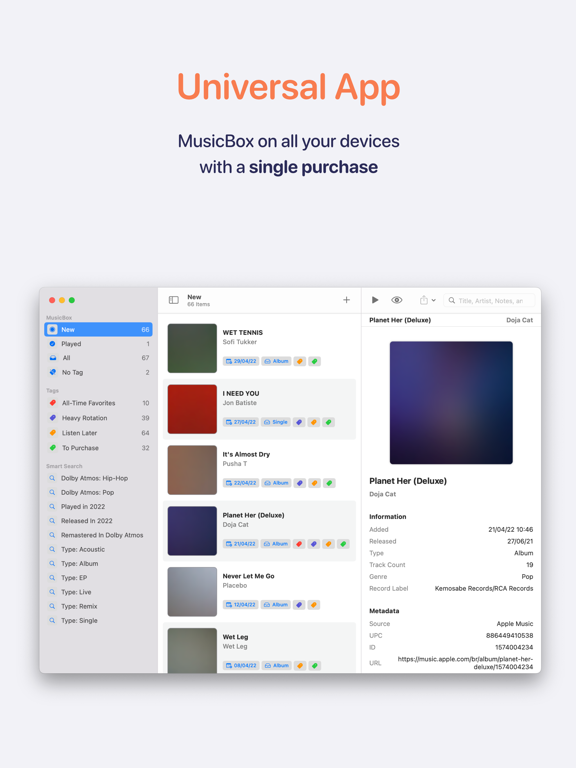 MusicBox is the best way to save albums and songs for later. You can use it to keep track of new music you want to listen to later, catalog and organize favorite albums and songs, categorize music with tags, assign notes, manage metadata, and more.

MusicBox collects relevant metadata of albums and songs from Apple Music, Spotify, Deezer, and Bandcamp, and is deeply integrated into the system with features such as Widgets, Share Sheet, Shortcuts, iCloud, and more.

ORGANIZE YOUR ALBUMS AND SONGS

– Apply tags to categorize your music and make it easier to find.
– Use Auto-Tagging to automatically tag albums and songs based on rules you set.
– Deep Search allows searching your music by title, artist, genre, record label, tags, type, and notes.
– Create a Smart Search to automatically filter albums and songs based on a set of rules.
– All MusicBox features and data are available on the Shortcuts app, so you can create custom shortcuts and automate your workflow.
– iCloud keeps your database in sync between your iPhone, iPad, and Mac.

– Easily access your music from the Home Screen with customizable Widgets.
– Play using the system’s music player.
– Tap an album or song to open it on Apple Music, Spotify, Deezer, or Bandcamp.

Play is a modern app with support for the latest system features such as Home and Lock Screen widgets, Shortcuts actions, Focus Filter, Action Extension, Context Menu, iCloud sync, and dark mode. It is also available on the Mac as a universal app, so you can enjoy it with a single purchase across iPhone, iPad, and Mac.

MusicBox 1.1.3 brings support for Playlists and Apple Music Stations. It also adds the ability to create a Smart Search for upcoming albums, Shake to Open, and more:

• Added support for playlists: save an entire playlist instead of each individual song.
• Added support for Apple Music Stations.
• Shake to Open: open a new random album/song/playlist by shaking the device. Configure in Settings > General.
• You can now create a Smart Search to filter upcoming albums based on a relative release date parameter.
• Added a new Date Played attribute that is updated every time an item is marked as played.
• Added Genre as a metadata option for List and Grid view.