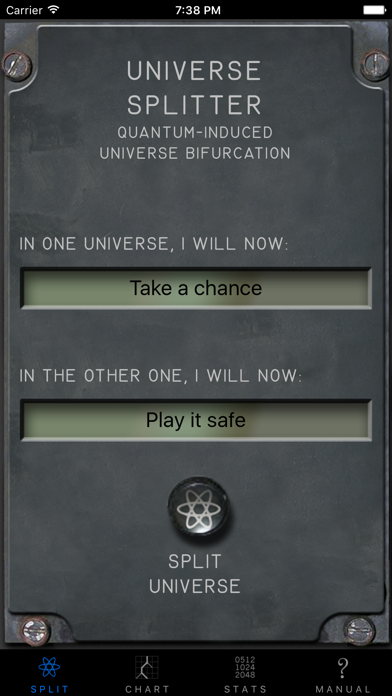 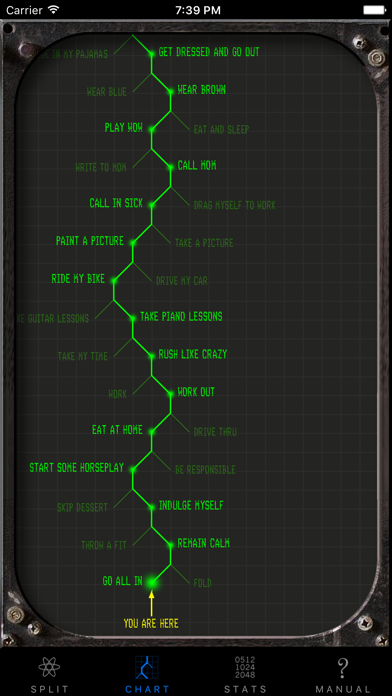 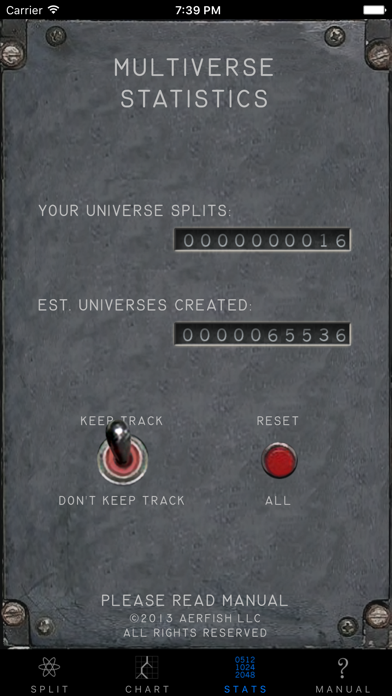 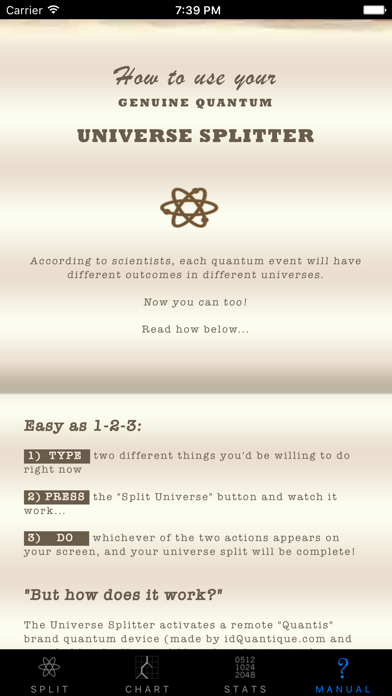 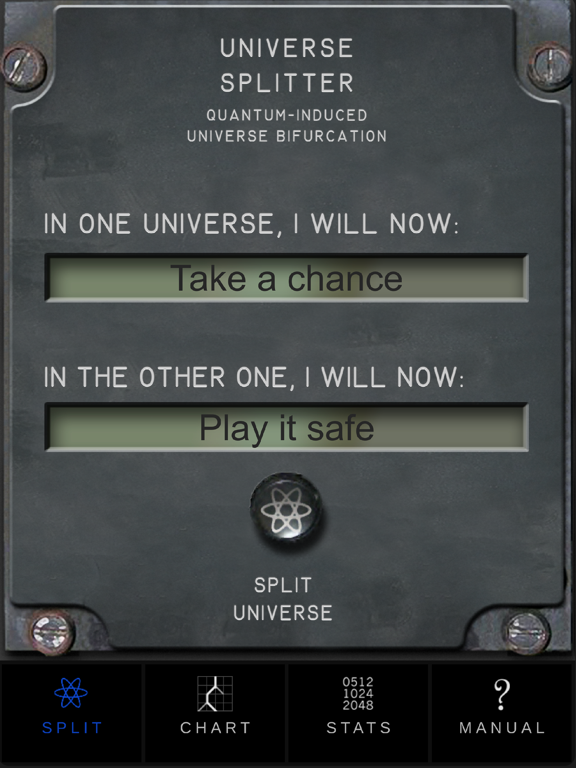 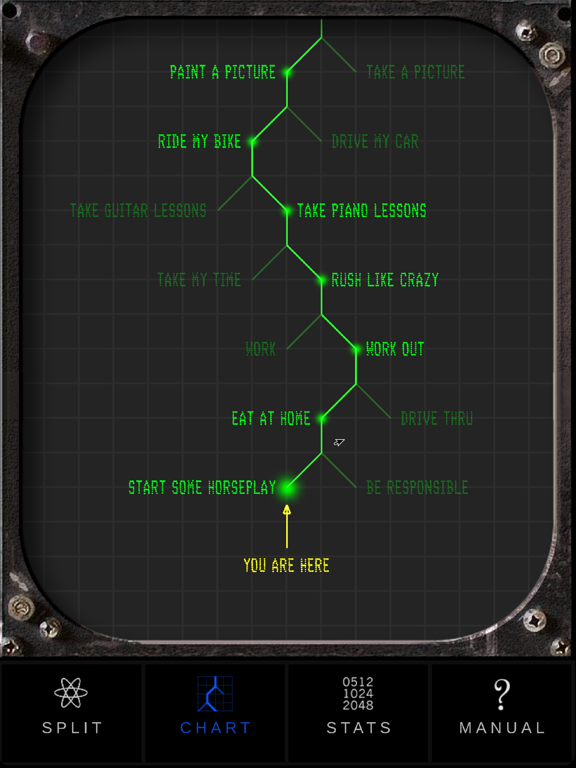 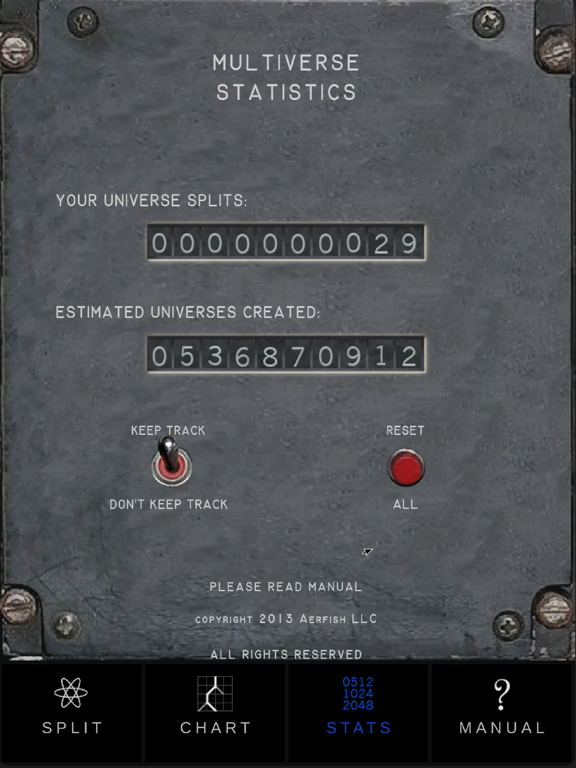 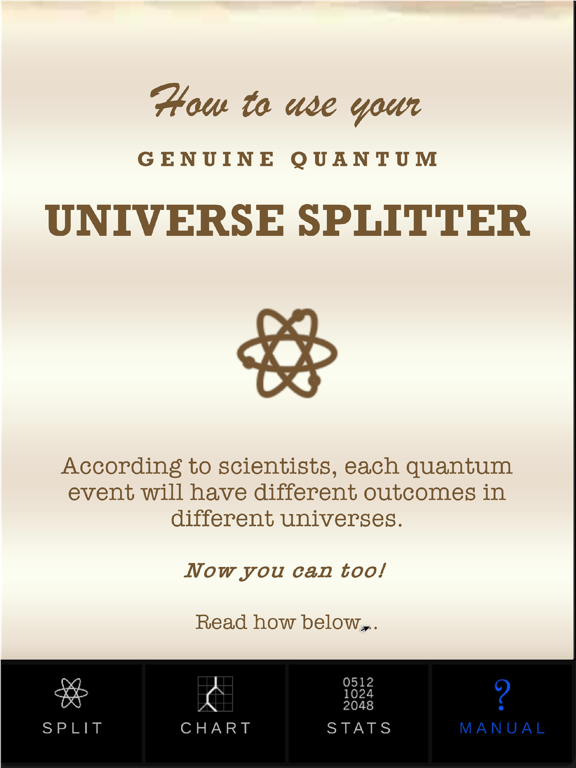 “According to quantum mechanics, every observation brings new universes into existence. But these universes have been completely useless to us — until now! Universe splitter helps guarantee that there’s at least one version of you who has made all the right choices.”
— Sean Carroll, physicist at Caltech and best-selling author

“The functioning of this app is in complete agreement with the many-worlds interpretation of quantum mechanics.”
— Garrett Lisi, PhD, Theoretical Physics

Scientists say that every quantum event plays out simultaneously in every possible way, with each possibility becoming real in a separate universe. But that was just an abstract concept… until now! Because now, you can harness this powerful and mysterious effect right from your iPhone.

When faced with a tough choice, Universe Splitter allows you to live out BOTH of your options… in separate realities.* No mere coin-flip app can make this claim!

Here’s how it works:

Let’s say you have to make a difficult decision — for example, whether to accept a job offer or to turn it down. Just type both actions into your Universe Splitter, and press the “Split Universe” button.

Universe Splitter will then, over the internet, activate a remote “Quantis” brand quantum device (made by id Quantique, and certified by the National Metrology Institute of Switzerland) which will send a single photon into a quantum “either/or” state. According to current scientific thinking, though, the photon will actually be in a “both, but in separate universes” state!

Within seconds, Universe Splitter will report to you which of those two universes you’re in, and by taking a different action in each, you will cause these previously identical universes to diverge.*

Of course, you won’t be able to see or interact with that other universe. In fact, you may question whether anything at all happened. But according to the prevailing quantum theory, there will be two of you pondering whether anything just happened!

Right now you’re probably wondering: Does this app genuinely contact a quantum device in Geneva? YES, it absolutely does, and we would be happy to provide proof of this upon request. Email [email protected] for more info.

As BDembko writes: “The real joke… is that it’s NOT a joke. Which actually makes it funnier, if you ask me. (Kind of an Andy Kaufman kind of thing) The guy actually went the extra 10 miles… and it seems so absurd to us, that we figure it’s a joke. But it’s not… which then means it is. This is seriously quantum humor to the extreme.”

And — if an infinite supply of universes isn’t enough for you — this app also gives you stylish, retro, machine-age graphics (complete with industrial-strength sound effects) which will underscore the awe-inspiring significance of each twist and turn of your ever-branching multiverse.

If you’re a believer in the “Many Worlds” interpretation of quantum behavior, this app is a must. And if you’re not, just think of this as THE most random of all coin-flip apps — in that it uses the single most unpredictable thing in the known universe: a single quantum event!

*According to prevailing quantum theory. Universes cannot contact each other. Not responsible for user’s actions. ©Copyright 2009 Eric Daniels – All Rights Reserved