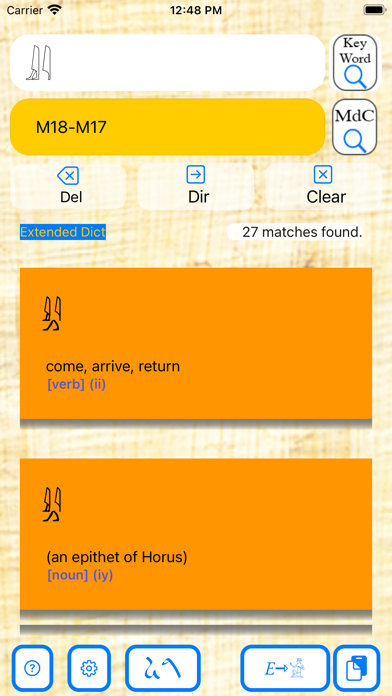 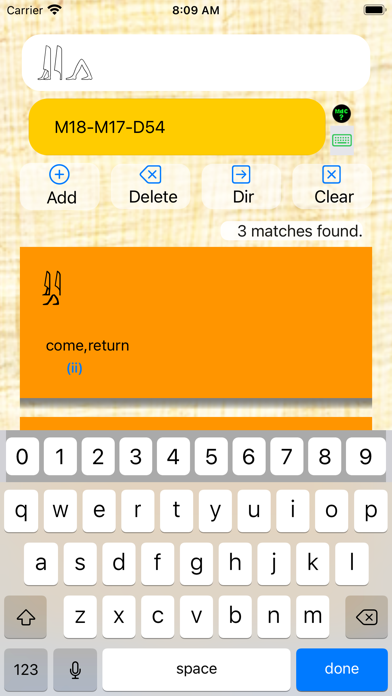 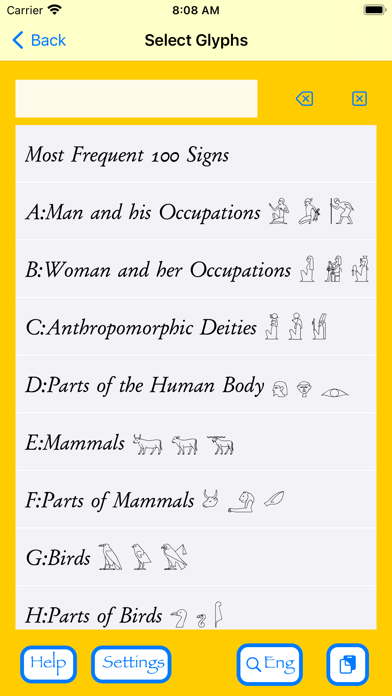 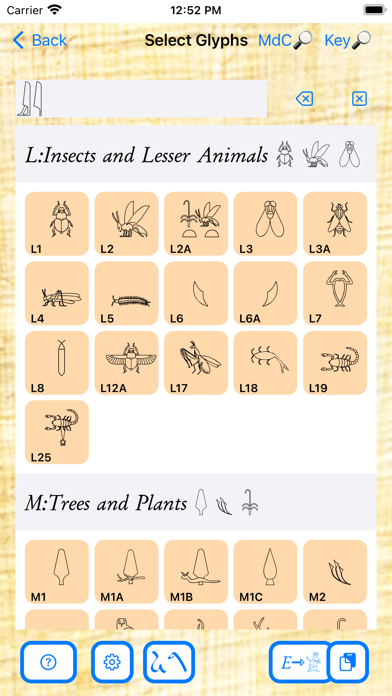 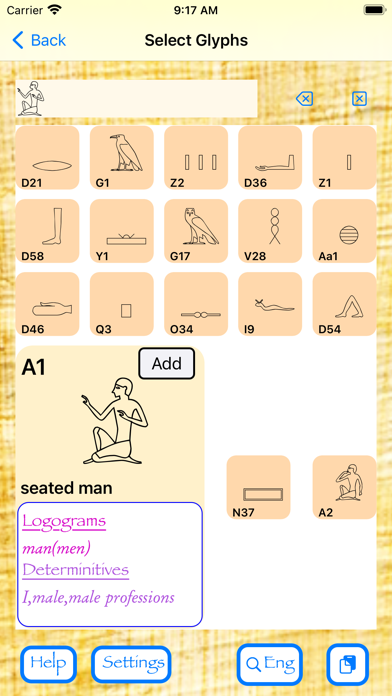 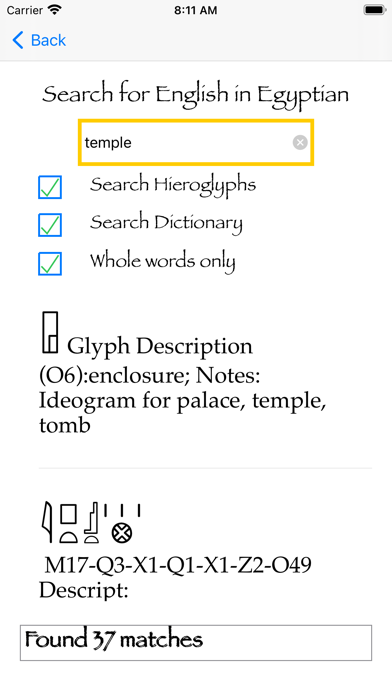 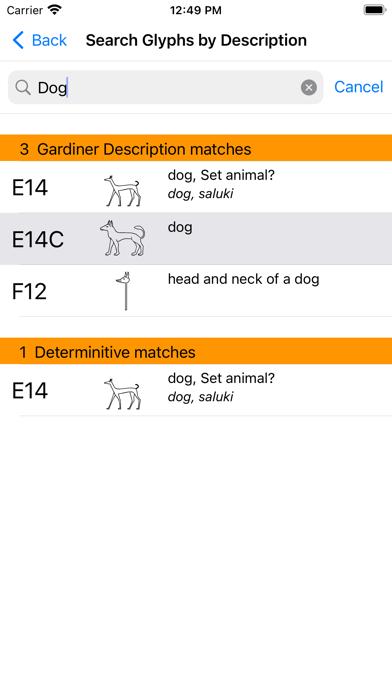 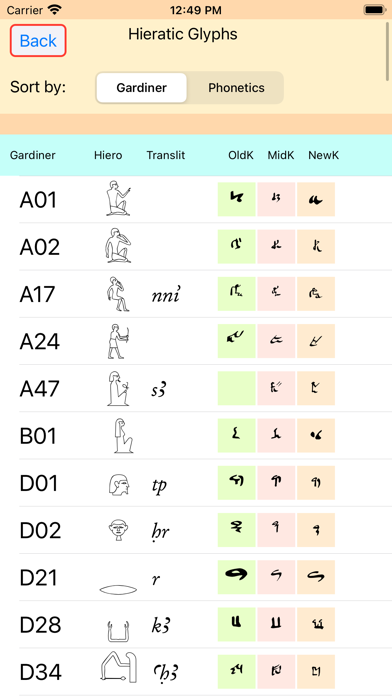 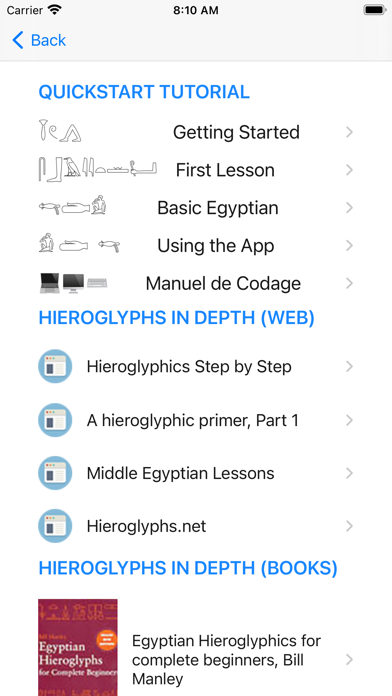 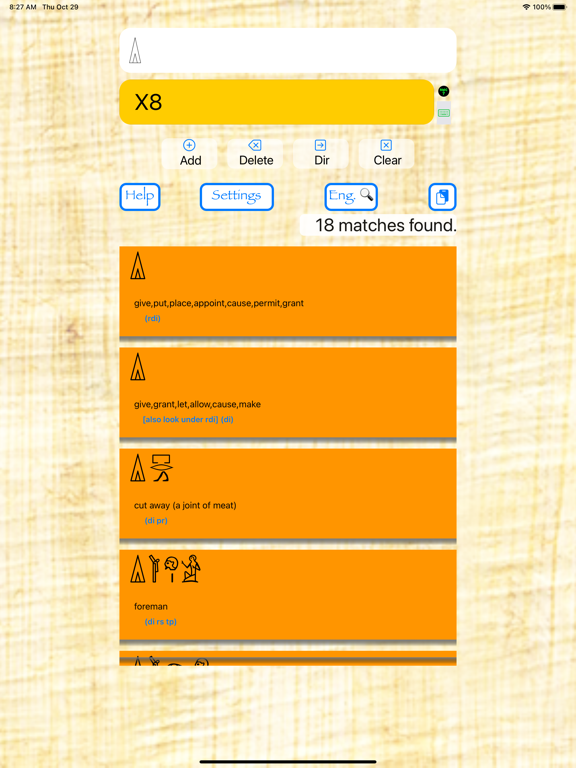 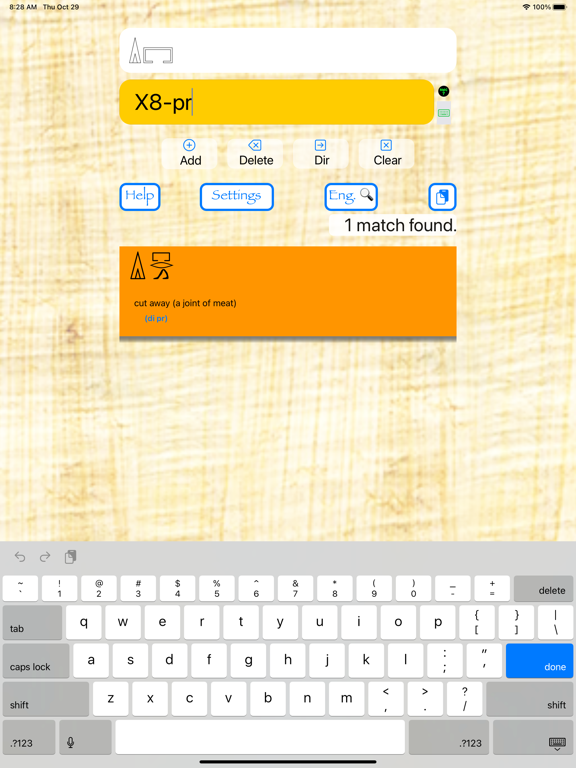 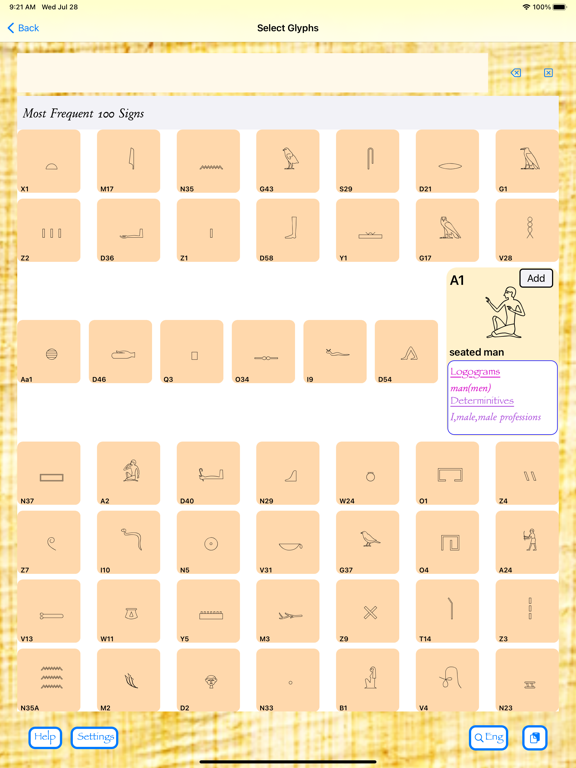 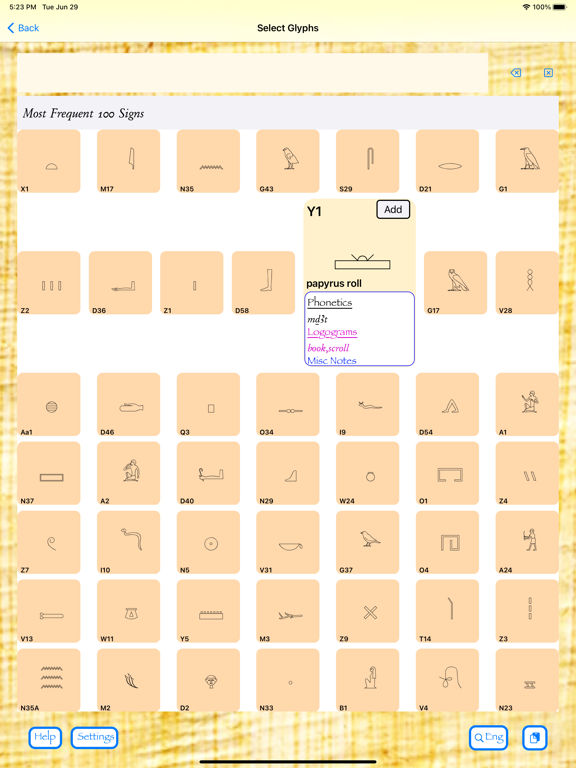 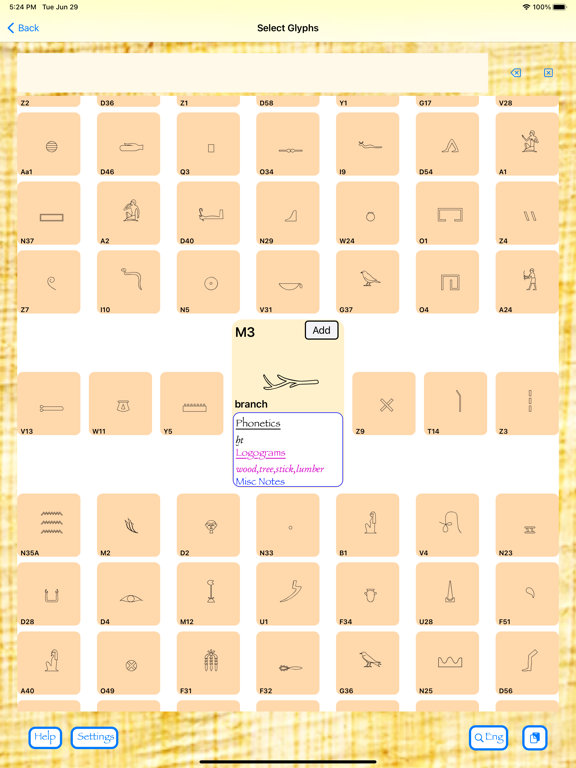 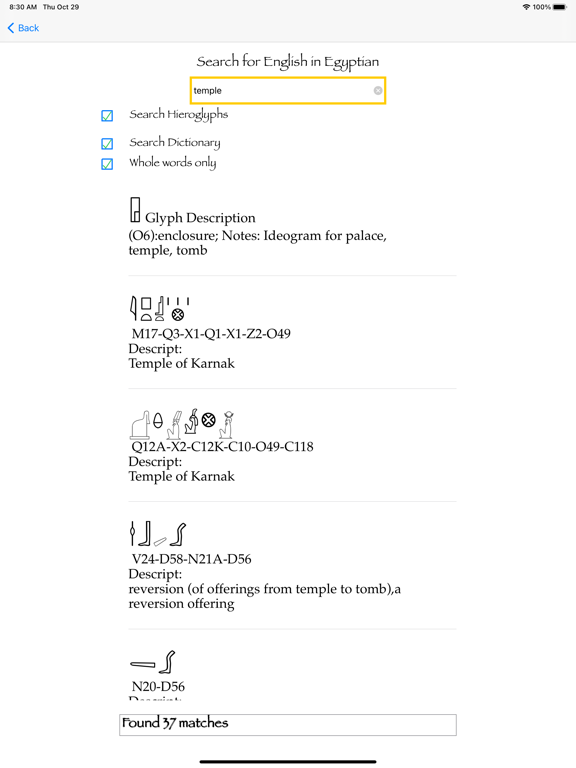 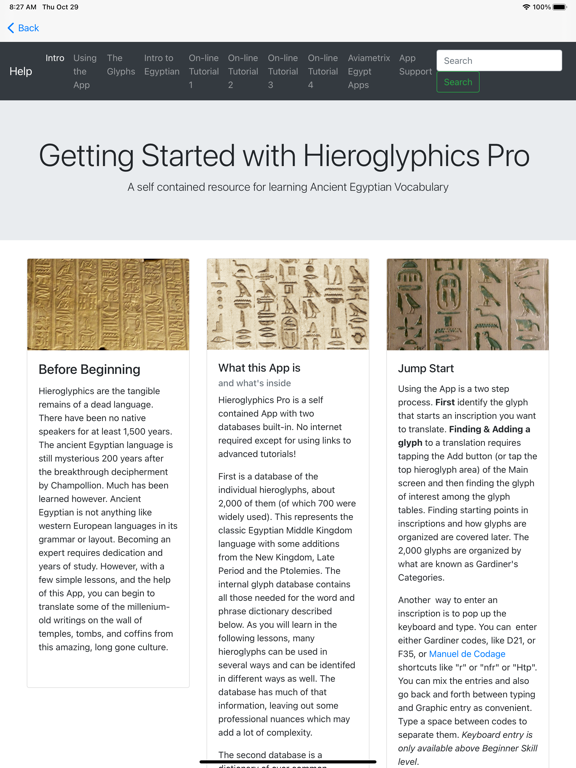 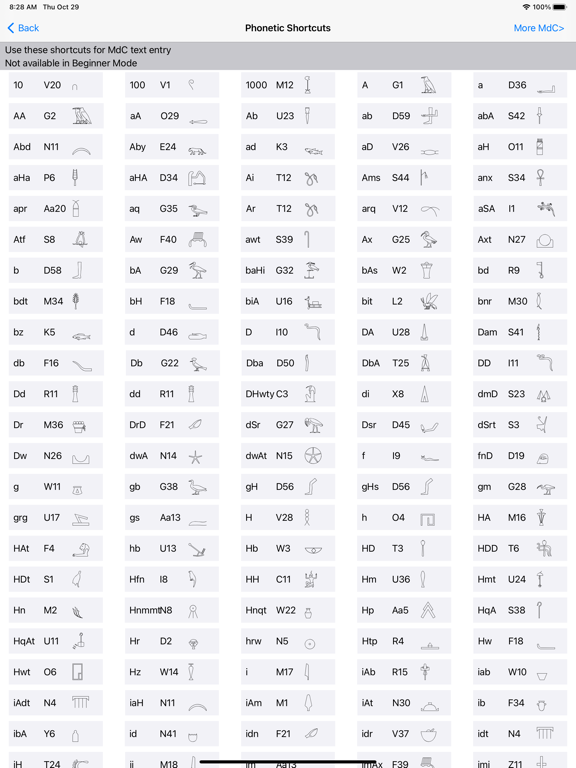 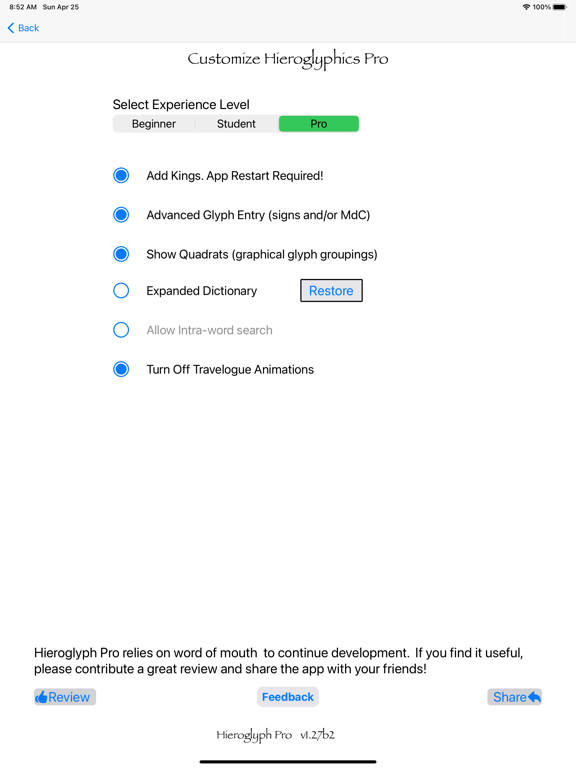 Simply the best interactive, most complete, self contained dictionary and translator between English and Ancient Egyptian!

This app explains what the ancient symbols mean, how they were pronounced and how they formed words and phrases.

The App contains 2229 hieroglyphic signs and almost 49,000 words, phrases, titles, epithets, and locations used in Ancient Egypt. The dictionary also contains the Horus, Birth, and Throne names of all the known Pharaohs and Queens of Egypt. Our dictionary has more than twice the content of any other smartphone translation apps.

Hieroglyphics Pro has several modes:
Beginner, Student and Pro.
Beginner mode uses a minimal set of 200 glyphs and an easy pronunciation guide.
Student mode allows choice of over 700 glyphs, organized by shape, and standard transliteration.
The Pro mode uses all 1,071 glyphs in Gardiner’s classic categories with over 1200 additional New Kingdom and later signs.

A unique feature of Hieroglyphics Pro is the ability to find glyphs by how often they are used in inscriptions. Adding the common signs to a phrase or word is a snap! Egyptian words and phrases are drawn graphically in groups, in the artistic style of the ancient inscriptions.

The App now offers 4 ways to enter Hieroglyphs for translation:
•Graphically from Gardiner groupings, or in Beginner Mode, Manley’s Groupings
– A unique feature allows finding glyphs sorted by their frequency of use!
•Direct keyboard text entry of Gardiner codes (i.e., A1, D21, Aa2) and phonetic shortcuts as defined by the MdC (i.e., Htp, nTr, r, etc.)
•By transliteration symbol from the MdC table
•Searching for keywords in a glyph’s description or determinative words

Text entries of Gardiner Codes and MdC can now be edited with a cursor and finger swiping, just like other text editing apps!

Hieroglyph Pro is the first and only mobile App to introduce Hieratic glyphs, and how they evolved over the centuries.

Hieroglyphics Pro is a modern iOS 16 App, back compatible to iOS 13, Dark Mode and all. It contains help files and links to both on-line references and to printed books for advanced study.

Hieroglyphics Pro has been developed and evolved in consultation with professional Egyptologists.