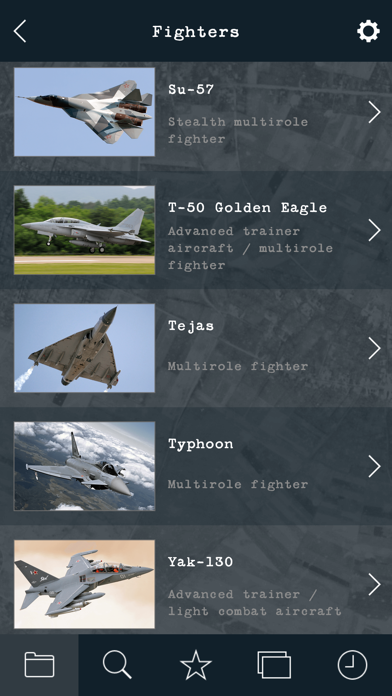 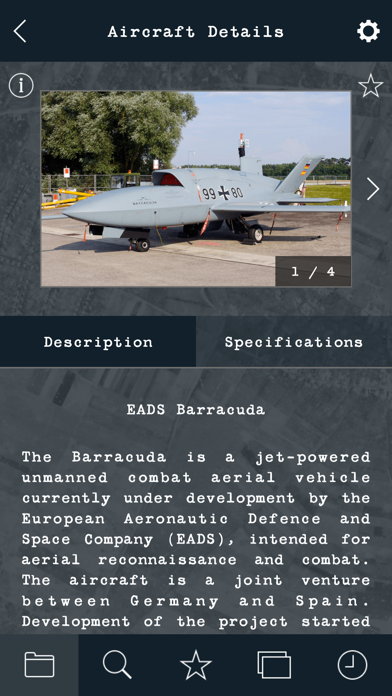 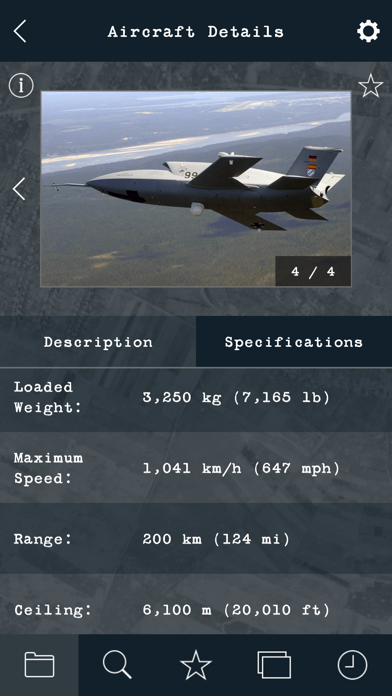 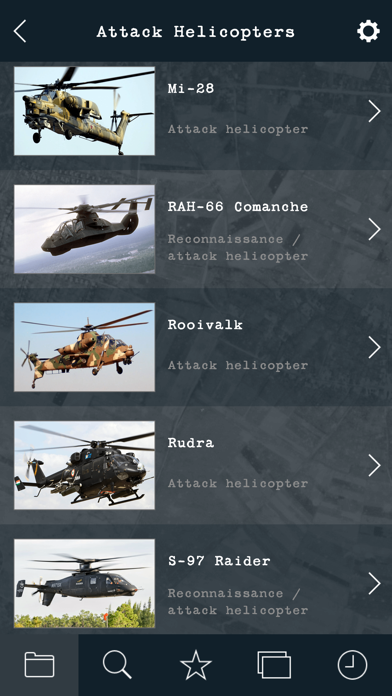 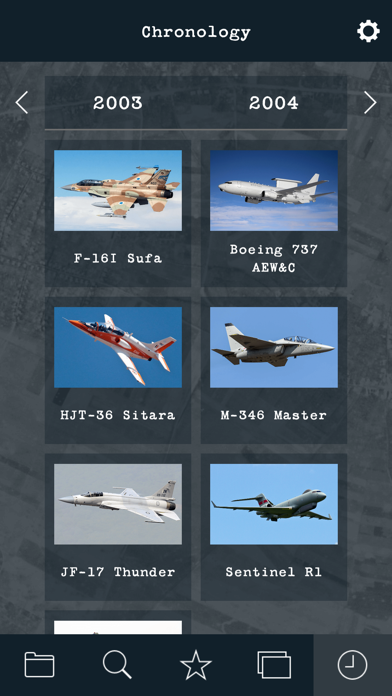 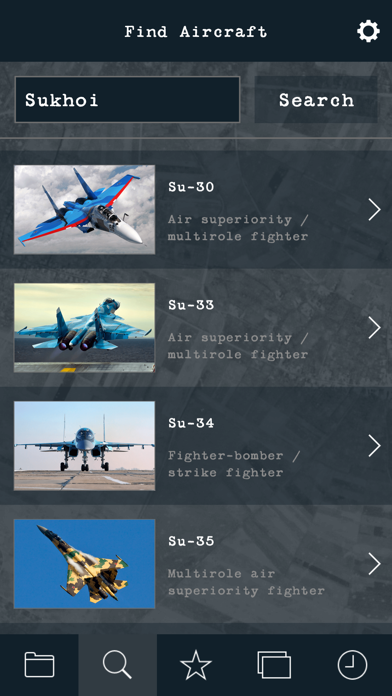 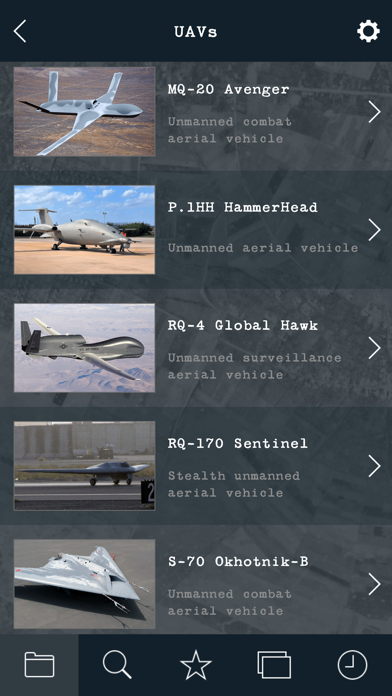 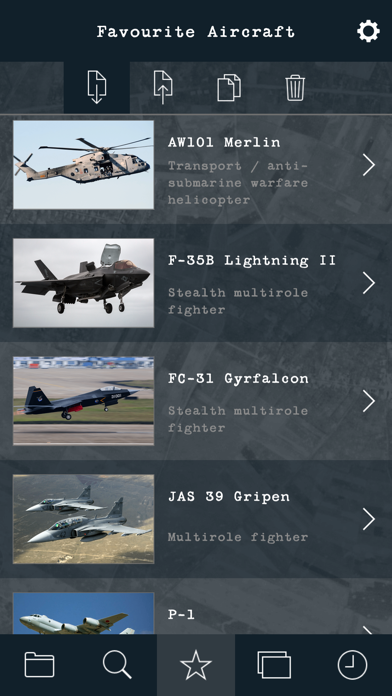 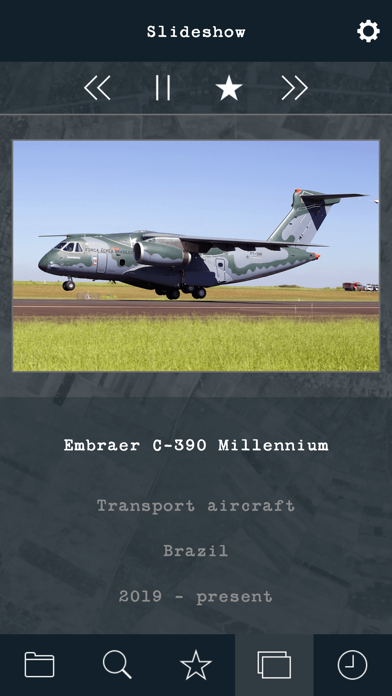 Modern Military Aircraft is a mini encyclopedia of the most important aircraft in service today and the most innovative concepts currently in development.

This pocket compendium app contains over 240 aircraft and lets you explore at a glance:
– the evolution of fighter aircraft, from fast missile platforms (Mirage 2000, F/A-18 Hornet and MiG-31) to stealthy designs (F-22 Raptor or FC-31 Gyrfalcon) and supermanoeuvrable fighters with thrust vectoring (Su-35 or MiG-35),
– the various directions in attack aircraft design, from stealth concepts (F-117 Nighthawk) to smaller and nimbler airframes (including the Alpha Jet, AMX or Scorpion),
– the future replacement of expensive and complex close air support aircraft (Su-25 Grach and AC-130 Spectre) with cost-effective alternatives (like the AT-6 Wolverine or AT-802L Longsword),
– the advancements in V/STOL technology (as seen in the AV-8B Harrier II and the F-35 Lightning II series), culminating with the arrival of tiltrotors (V-22 Osprey or V-280 Valor),
– the extensive use of dedicated attack helicopters (T129 ATAK, Ka-52 Alligator and AH-1Z Viper), modern multipurpose utility helicopters (AW159 Wildcat, NH90 and the improved UH-1Y Venom) and heavy lift rotorcraft (the CH-53 family),
– the various designs for tactical airlifters (from the classical form of the C-27J Spartan, to the unusual An-72/74 and the unique An-225 Mriya) and aerial refuelling tankers (KC-10 Extender, KC-135 Stratotanker or Il-78),
– the increased number of purpose-built reconnaissance aircraft for AEW&C missions (like the A-50 or the Ka-31) and maritime patrol (CN-235 or P-1),
– the reduction in deployments of large strategic bombers (such as the B-2 Spirit or Tu-22M) in favor of surgical strikes conducted by fighter-bombers (Su-34) and multirole aircraft (F-15E Strike Eagle),
– the continued development of UAVs, from reconnaissance variants (like the Heron or the RQ-170 Sentinel) to combat aircraft (from MQ-1 Predator to MQ-9 Reaper and MQ-20 Avenger),
– the numerous multinational collaborations created to reduce development costs and share technical know-how (as seen with the Typhoon, Tiger/Tigre, C-160, Tornado and A400M Atlas projects),
– the improvements made in trainer aircraft, now capable of supersonic flight and light attack duties (T-50 Golden Eagle or JL-10/L-15 Falcon).

Each aircraft entry contains at least one image, a short text that summarises the aircraft’s development and service history and a detailed specifications table offering place of origin and production information, crew, weight and dimensions data, armament details, powerplant and performance figures.

– Over 30 new aircraft added
– Support for the latest devices
– Aircraft can now be searched by place of origin
– Aircraft in the Chronology section are now ordered by the date of their first flight
– Improved aircraft history and technical spec sheets
– Minor bug fixes and improvements
Partage(s)
4.1/5 - (92 votes)