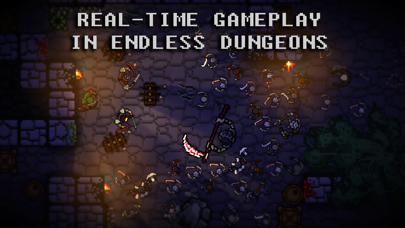 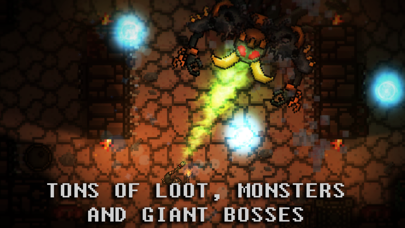 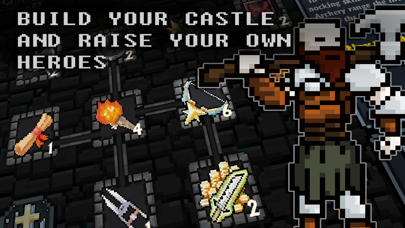 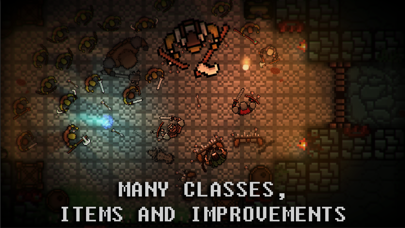 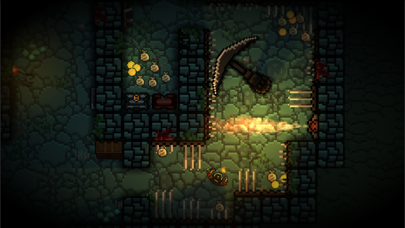 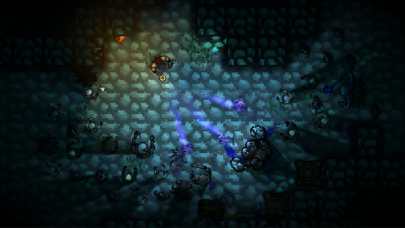 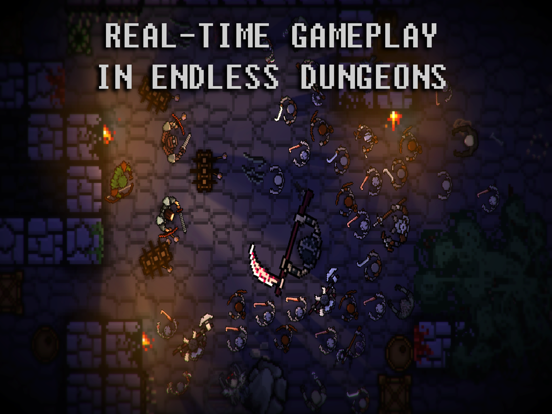 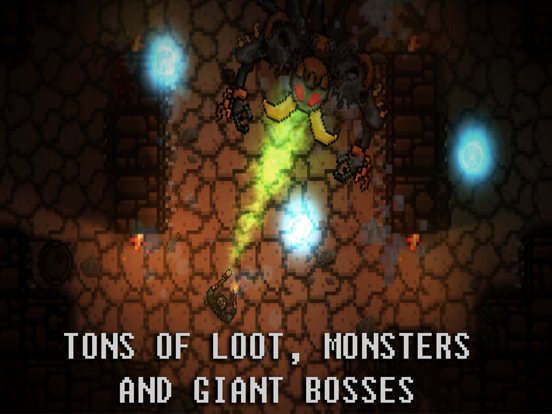 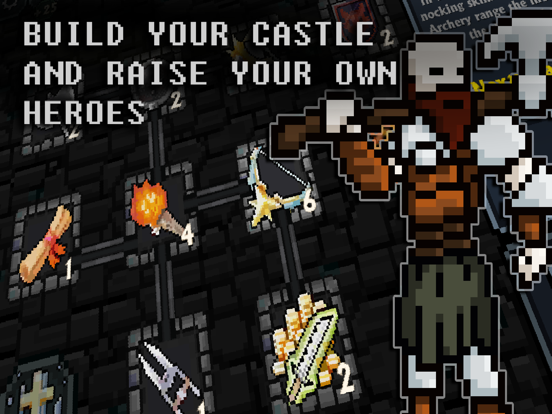 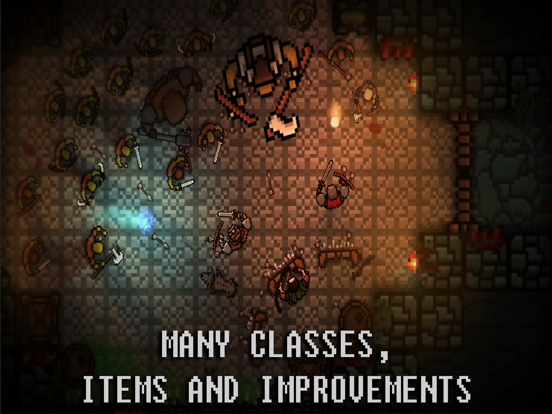 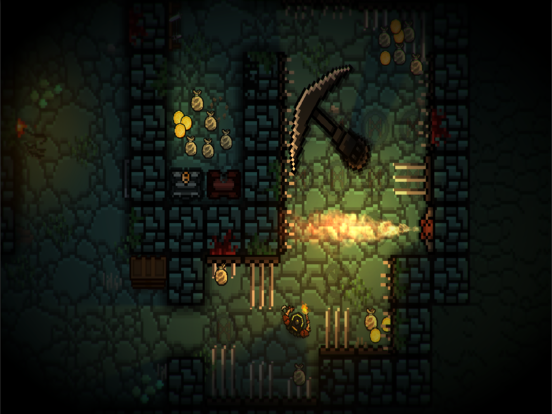 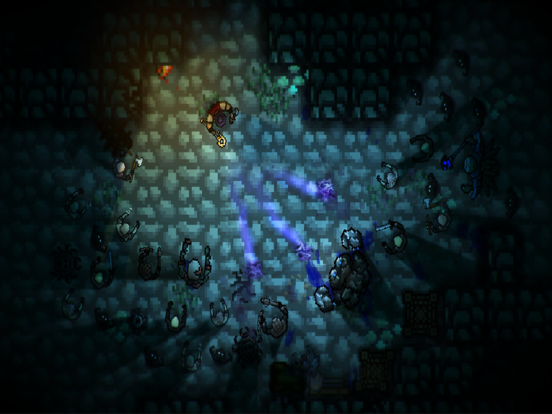 POCKET ROGUES brings old school Action-RPG flavor to the Roguelike genre. Here you must fight your way through hordes of monsters, explore unique and randomly generated locations, upgrade your guild fortress, and develop heroes of ever-increasing might if you hope to discover the lost secrets of a mysterious dungeon.

• THE GAME IS PLAYED ENTIRELY IN REAL TIME! Move, dodge, avoid obstacles, outmaneuver and outflank! Enjoy an elaborate combat system focused on character control and player skill.
• TRY YOUR LUCK AS ONE OF MANY HERO CLASSES, each with unique skills, specific equipment, and their own progression tree.
• EVERY DESCENT IS SPECIAL! From locations and monsters to loot and chance encounters, everything is generated during the game. You will never see two identical dungeons!
• THE GAME INCLUDES UNIQUE LOCATIONS, each with its own visual style, distinctive enemies, traps, and interactive objects. Once discovered, you can move freely between them all.
• Construct and improve buildings in the territory of your very OWN GUILD FORTRESS. Unlock new hero classes, strengthen existing ones, and gain access to an arsenal of fierce techniques.
• REGULAR UPDATES! The game has been supported and actively developed for a long period of time. The game’s creator works in close contact with the community and dedicated players to ensure a high-quality experience for everyone.

Pocket Rogues contains many different dungeons, each with its own unique loot and monsters. A wide variety of classes and dozens of specializations allow you to take alternative approaches to the game’s numerous boss battles, and each will test your skill in a new way. Add in Pocket Rogue’s traditional RPG components, such as character progression and exploration, and you will never feel bored!

“For many centuries, a dark dungeon has called to hapless travelers, whispering secrets and promising priceless treasure. None who enter have ever returned, and rumor says that each met an unspeakable fate at the hands of a true Evil. These gloomy legends, of course, only entice new adventurers to try their luck in the depths, eager for glory, fame, and riches beyond imagination. What are you waiting for? It’s time to become one of them!”

• The number of all the GEMS, obtained by killing monsters, bosses and for completing tasks, is increased by 50%
• Added the ability to SAVE the game before leaving, being in any normal dungeon, as well as auto-save while minimizing the game
• Berserk, Necromancer and all future PREMIUM CLASSES are available for gold
• Added the ability to start descent into the DUNGEON from a given depth
• All normal dungeons are completely FREE

For all questions, you can also contact the developer directly: [email protected]

[Generation]
* Added a new mini-boss. Its gates can be found in all locations, except for the Catacombs, Prison and Borderlands
* Added a new type of generation – “lair” (and one sublocation of this type). The lair is a unique one-story dungeon that can be entered through a gate in any normal dungeon
* Gates are now generated more often, and two altars can appear on the same floor at once
* Small rooms are now more common in the Borderlands
[Gameplay]
* Added the ability to return to the Fortress alive. To do this, visit the Camp after the first kill of the Forgotten Keeper
* Updated the summary screen at the end of the descent
* Added chat to multiplayer. Be polite and respect your allies!
[Fortress]
* Added 2 additional levels to the Alchemy Lab building that reduce the cost of combining consumable items
[Items]
* Added 12 new recipes for the Forge
[Balance]
* Inventory items are no longer sold on character death or when ending the game via the pause menu. Now the automatic sale occurs only when returning to the Fortress from the Camp (the price when selling through the Merchant and when returning to the Fortress is the same)
* The base cost of selling (both to the Merchant and when returning to the Fortress) of all items of equipment has been increased by 4 (!) times
* “Underground Protein” modifier now increases max. the level of generated monsters by 100% (was by 150%)
* After each purchase of “Potion of Oblivion” or “Serum of Oblivion”, the cost of the next similar potion is increased by 100 gems
* Pet Golem is now an elemental (previously it belonged to the class of animals)
* Pets and mercenaries are now more difficult to distract the boss from the character
* Item drop chance is now more balanced and more dependent on creature type (common, special, elite, etc.)
* The “Range” effect now affects the range of the Hunter’s lunges, and not just normal attacks
* Bleeding no longer affects undead
[Misc]
* Added progress synchronization via iCloud (can be disabled in Settings). It works when you first start the game, and will allow you to restore progress after reinstalling the game, as well as transfer data from the free version to Ultimate without any additional actions on the part of the player. The old autosave to the cloud system is now available only after creating an in-game account
* On the character selection screen, you can now view their description and characteristics, as well as detailed statistics (it starts to be taken into account only after this update)
* The world map now displays a record score for each of the locations (on the “Rating” button)
* Inventory now shows total item prices instead of base prices
* Text in dialogs is now animated
* Added new hints on the loading screen and on the signs in the dungeons; some old tips edited
* Changed icons of some items
* Changed the appearance of the Goblin-Druid
* Updated some sound effects
* Companions will no longer come close to the character if possible
* When receiving new blueprints or modifiers, the volume of the music will be temporarily reduced so as not to drown out the corresponding sound effects
* The color of the damage pop-up numbers is now different if the shield is hit by the Steel Ring
* The table next to the Blacksmith can now be broken (in case an item is accidentally thrown there)
* During tutorial, the character now receives a wooden sword